What are the Benefits of Organic Milk and Dairy Products?

Milk can help provide kids with the nutrients and vitamins they need to build strong bones and healthy muscles. But not all milk is created equal. Organic milk has more of the good stuff and none of the antibiotics, synthetic growth hormones or controversial pesticides. Organic cows are happier and healthier which leads to more nutritious milk and healthier babies and kids! By choosing organic milk, you can get the nutritional benefits of milk without exposing your family to chemical contaminants. Numerous studies have found that organic milk has a higher nutritional content, and even more healthy omega-3 fatty acids, and more disease-fighting antioxidants than non-organic milk. Organic cows are raised in humane conditions and eat healthy diets, so that your glass of organic milk can be served without antibiotics, synthetic growth hormones or controversial pesticides. 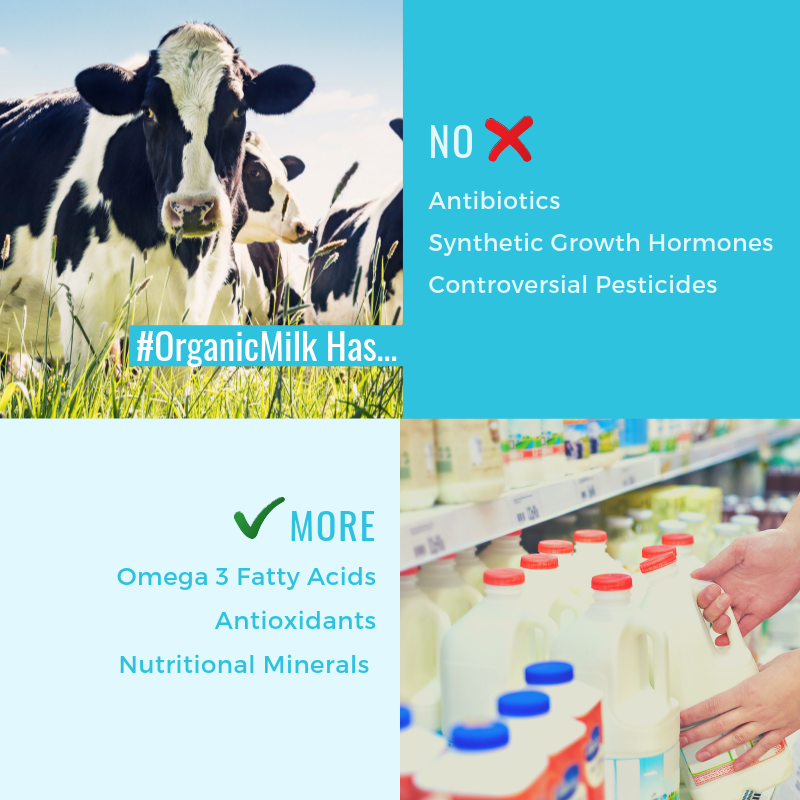 Why is the good stuff good?
no
column-1
30px

Why is the good stuff good?

Omega-3 and Omega-6 are essential fatty acids that we need to be healthy, but our bodies don’t produce them naturally, so we must obtain them through our diets. While both are important, there’s a healthy balance that must be achieved. Most Americans are getting too much omega-6 in their diets and too little omega-3.

Having too many omega-6 compared to omega-3 in your diet can lead to several common – and scary – diseases including cardiovascular disease, asthma, osteoporosis, breast cancer, prostate cancer and autoimmune disease. Drinking organic milk – high in omega-3 – can help balance the ratios of omega-3 and -6 and suppress these diseases!

What about the bad stuff?

A recent study published in Public Health Nutrition shows that organic milk does NOT contain any residues of currently used pesticides or antibiotics, and has lower levels of growth hormones than conventional milk. The study also found that non-organic milk tested positive for illegal antibiotics, high levels of growth hormones and controversial pesticide contaminants.

Organic dairy production relies heavily on holistic management of dairy cows, which raises the standard of living and promotes greater health in the livestock.

While growth hormones are naturally produced by animals, the use of synthetic growth hormones has gained popularity in conventional dairy operations because they promote the production of milk. These hormones make their way into the milk we drink and can lead to changes in endocrine function which can affect our growth, brain development and reproductive capabilities. This study found that bovine growth hormone (bGH) residue levels were found to be 20 times higher in conventional milk than organic.

This study found residues from a number of controversial pesticides in conventional milk samples, while the organic samples tested clean. Here's a rundown of what was found:

Chlorpyrifos is currently one of the most commonly-used pesticides used in conventional agriculture. In 2018, a ban on all uses of chlorpyrifos was court ordered, but it currently remains registered until it undergoes a registration review. Chlorpyrifos was found in nearly 60% of non-organic milk samples. The pesticide is a neurotoxin associated with developmental issues in babies and children.

Permethrin is a neurotoxic pesticide used to control mosquitoes and insect pests in agriculture. It is approved for use on food and feed crops as well as livestock, lawns, in buildings and on clothing. Permethrin was found in 46% of non-organic milk samples. The pesticide is highly toxic to bees, other beneficial insects, fish, and other animals and insects that live in water. The EPA classified it as “likely carcinogenic to humans” if ingested.

Cypermethrin is a neurotoxic pesticide used to control insect pests in conventional agriculture, particularly in cotton, soybean and corn crops. Nearly 50% of non-organic milk samples contained Cypermethrin, which is highly toxic to bees, fish, and aquatic insects. It has been classified by the EPA as “possibly carcinogen.”

Atrazine is a toxic herbicide that is widely in conventional agriculture to kill weeds, particularly in crops such as corn. It is also used to kill weeds along public roadsides and railroad tracks. Atrazine was found in 26 percent of non-organic milk samples and is associated with the disruption of reproductive systems in humans. It is currently under review for pesticide re-registration by EPA.

Diazinon is a neurotoxic pesticide used to control insect pests in conventional agriculture, particularly in crops such as corn. Diazinon was found in 60% of non-organic milk samples. The pesticide is toxic to birds, bees, fish, frogs, and other insects.

The Organic Center's new report - The Benefits of Organic Dairy - will help you understand why not all dairy products are created equal. The report explains new research findings that show that organic is an easy way to avoid contaminants in milk, giving consumers an option that doesn’t include even trace amounts of pesticides, antibiotics, or synthetic growth hormones.

The report highlights what’s special about the way organic dairy is produced, and why those differences are important for the health of the cows, the health and safety of your family, and the environment.

What are the Benefits of Organic Milk and Dairy Products?
What does the Research say?
What about Animal Welfare and Climate Change?
Is Milk Healthy?
Styles