Another day, another misleading headline

Another day, another misleading headline 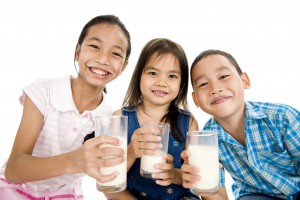 Here at the Organic Center we’ve written several blogs covering the benefits of organic dairy.  Organic dairy has a superior nutritional profile without using dangerous pesticides, growth hormones, and antibiotic-resistant bacteria.  In light of the many scientific studies supporting the advantages of organic it’s surprising that media articles continue to surface purporting to debunk the value of organic.

The most recent headline to emerge claims “Organic and UHT milk could put unborn babies at risk,” and was published in the Guardian on April 27, 2015.  This sensationalistic article misrepresents findings from a study by researchers out of the United Kingdom.  In fact, the study did not examine the health of unborn children, nor did it look at the risk factors associated organic milk intake.  What the researchers did examine is iodine, an essential trace element critical for the production of thyroid hormones.  Iodine deficiency can lead to serious health issues such as enlargement of the thyroid (called a goiter), hypothyroidism, and harm mental development in infants and children whose mothers were iodine deficient during pregnancy.

The study cited in the article specifically looked at milk produced in the winter season, as milk composition can vary due to environmental factors like feed and season.  The researchers compared different production and processing methods, including organically produced, conventionally produced, and ultra-high temperature (UHT) processed milk.  They found that conventional milk had higher levels of iodine than organic milk and that ultra-high temperature processing resulted in lower levels of iodine.

Despite the finding that organic milk had lower levels of iodine, the suggestion by the Guardian that these findings can be translated to risks for pregnant women are misguided.  Milk is not the only source of iodine in people’s diets. Iodine is added to most table salt in the United States, and can also be found in seaweed, seafood, and enriched wheat products. When iodine deficiency has been found in individuals, it is linked to reduced intake of iodine-rich foods.  Iodine deficiency has never been linked to drinking organic milk.  The study author even points this out, stating that “the study has no measures of iodine status in an individual, so we cannot conclude that those who consume organic milk have a lower iodine status, as that depends on the quantity of organic milk consumed and intake of other iodine-rich foods.”

The slightly lower levels of iodine pale in comparison to the many benefits of organic milk. Research out of Washington State University in 2013 showed that organic dairy has 25 percent less omega-6 fatty acids and 62 percent more omega-3 fatty acids than conventional milk, yielding a 2.5-fold higher omega-6: omega-3 ratio in conventional compared to organic milk.  Low omega-6:omega-3 ratios are associated with preventing cardiovascular disease, cancer, and inflammatory and autoimmune diseases, so the nutritional profile of organic is vastly superior to that or conventional dairy.  Another study tackled antibiotic resistant bacteria, finding that bacteria collected from dairy herds on conventional farms were more resistant to antibiotics than those on organic farms.  Additionally, the use of pesticides and growth hormones are banned from use on organic operations, so you can be sure that when you choose organic you are avoiding potentially harmful synthetic chemicals.

The science supporting the benefits of organic dairy is sound, and the study cited by the Guardian does not focus on the truly important reasons for consuming organic dairy. Choosing organic allows people to benefit from the improved nutritional profile, while avoiding potential hazardous compounds – details that are important for the health of both adults and children alike.

It is unfortunate that this article chooses to sensationalize scientific evidence and make claims that are not supported by the results.  Bottom line, there’s no controversy about the health benefits of organic milk, and choosing organic milk will ensure that you avoid exposure to dangerous pesticides, growth hormones, and antibiotic-resistant bacteria, while maintaining a superior nutritional profile.