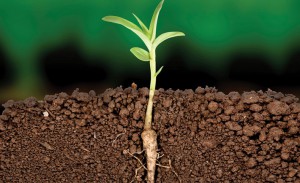 was an exciting year for organic research, with multiple cutting-edge studies revealing scientific breakthroughs on the environmental and human health benefits of organic food and farming.

In 2015, The Organic Center released almost a hundred study summaries and blogs about scientific breakthroughs of interest to organic stakeholders. Research covered environmental issues such as soil and pollinator health, health issues such as pesticide exposure, and several other critical categories.

There was an acceleration of research about the benefits of organic regarding soil health—fitting because 2015 was the International Year of the Soil. Soil is the backbone of our food security, so practices that support and maintain healthy soil are critical for our long-term ability to feed the world.­­

Some of the most interesting studies looked at how organic farming affects soil over time, showing that the longer land is managed organically, the healthier the soil becomes. There were also studies showing that organic management increases beneficial fungal diversity in soils. Other studies showed that organic farming can improve and increase macrobiotic soil communities such as earthworms, beetles and nematodes, as well as microorganism activity, nutrient availability and soil structure.

These benefits of organic management have even broader implications than positive impacts on soil’s ability to hold nutrients and water. One recent study showed that improved microbial communities in organic soils can suppress soil pathogens that attack plants. This surprising benefit was good news to many farmers who worry about soil pathogen control.

Soil health can have the added benefit of mitigating climate change. Organically managed soils help sequester carbon from the atmosphere, keeping it from adding to the growing concentration of greenhouse gasses. The Organic Center is currently conducting a project examining soil health, and the efficacy of organically managed soils at locking away carbon.

Recent research continues to show the prevalence of pesticide residues in food supplies. Research also shows that organic standards are effective at reducing dietary exposure to pesticides. One recent study looked at how eating organic affects the presence of dialkyl phosphate (DAP), a by-product created when the body breaks down organophosphate pesticides, and found that people who ate conventional diets had higher levels than consumers who chose organic at least occasionally. Another study specifically looked at young children, and showed that eating an organic diet reduces the exposure to some pesticides in youth

The fact that eating an organic diet can decrease pesticide exposure is especially good news given the number of recent studies about the health consequences of pesticide exposure. A veritable onslaught of research has highlighted the risks associated with pesticides. In 2015 alone, studies were released showing that pesticide exposure harms reproductive health, is linked with childhood leukemia, respiratory illness, developmental disabilities in children, and Parkinson’s disease, and can contribute to cancers such as colorectal, lung, and breast cancer.

ROLE OF ORGANIC IN FEEDING THE WORLD

One study summarizing many of the benefits of organic while looking at organic’s ability to feed the world was published in the scientific journal Nature Plants. This found that organic farming has an important role to play in sustainably feeding an ever-growing global population. Researchers from Washington State University reviewed 100 studies to determine how organic farming measures up to conventional food production in productivity, environmental impact, economic viability, and social well-being. They found that while organic agriculture may produce lower yields when compared to conventional agriculture, organic farms are more profitable, deliver more environmental benefits, and are healthier in terms of increased nutritional benefit and reduced dietary pesticide exposure than conventionally produced foods. Furthermore, they found that organic agriculture provides social benefits and contributes substantially to human health by reducing occupational hazards such as pesticide exposure. The authors conclude that “organic agriculture has been able to provide jobs, be profitable, benefit the soil and environment, and support social interactions between farmers and consumers.” Several studies looked at the benefits of organic to pollinators, and the risks associated with pesticide application. Bee populations have been declining over the last few decades. Unfortunately, these declines could have major effects on human health. One study found that bee population declines could lead to an increase in malnutrition, because pollinators are critical for the most nutrient-rich crops.

Because synthetic spray pesticides and seed coats like neonicotinoids are prohibited in organic production, organic farms can be a safe haven for pollinators. One recent study comparing organic and conventional farms found that there is higher pollinator abundance on organic farms.

The Organic Center documented these benefits in its recent publication on pollinator health. The report, which is on The Center’s website, showed that in addition to prohibiting the use of pesticides, organic farms also provide higher habitat diversity and more food sources for pollinators, all of which can have a synergistic beneficial effect on pollinator health.

FILLING GAPS IN OUR KNOWLEDGE

Given the increase in research showing the benefits of organic, it is no surprise that demand for organic continues to rise. However, farmers are facing a variety of regulatory and production challenges keeping organic acreage from growing as fast as demand.

The Organic Center is committed to collaborating with research institutions to fill these gaps and increase our knowledge about areas critical for expanding organic acreage. One of the most recent projects characterizes the use of biological soil amendments of animal origin and microbial food safety best practices in organic and sustainable agriculture. The impetus for this project was the ongoing implementation by the U.S. Food and Drug Administration (FDA) of the Food Safety Modernization Act (FSMA). Last fall, FDA revised some of its new rules putting into place the FSMA regulations, including a revision mandating wait times for raw manure application that conflicted with organic standards. Aided by a literature review from the Organic Trade Association, the organic sector managed to keep those regulations from being passed, but the ruling was just a postponement until more research is conducted.

To ensure that organic had a voice in the process for developing research examining raw-manure application intervals, The Organic Center reached out to top universities and laboratories  examining manure-related issues. The Center is currently collaborating with the University of California at Davis, University of Minnesota, University of Maine, USDA’s Agricultural Research Service, and Woods End Laboratories to incorporate stakeholder interest in developing a relevant long-term research plan.

The Center has been holding research needs listening sessions on this issue at regional and national conferences around the country. It also hosted a workshop at UC Davis attended by organic farmers, agricultural extension agents, scientific experts, and public officials in January to shape the research plan development based on current science.

This reflects another part of The Center’s role. Not only do we spotlight research that confirms the benefits of organic practices, we continue to take on critical issues that require research to address needs that are important to grow the organic industry.

This article was originally posted in the Organic Report, the official magazine of the Organic Trade Association