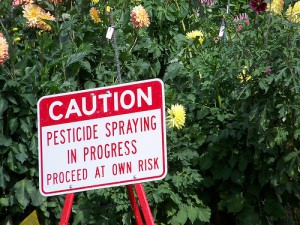 When looking at pesticide exposure, it’s important to think about long-term effects. I’m not just talking about “30 years from now” long-term, but the effects your exposure might have on your future descendants, even if they are never directly exposed to pollutants. This concept of disease inheritance is one of the most interesting (and frightening) new phenomena to be discovered in the past few years.

An example of this was recently described in a study that showed DDT exposure could increase rates of obesity several generations down the line. Researchers in the study exposed rats to DDT, and found that it caused an increase in dramatic fat accumulation and weight gain three generations later. Keep in mind that this study was done on rats, so the conclusions don’t necessarily translate to humans. However, the general idea is that if our great-grandparents were exposed to DDT, we might have a higher risk of obesity even if we were never exposed to DDT ourselves.

How does it work? 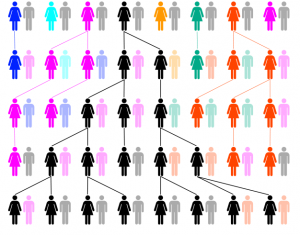 One of the main mechanisms responsible for the inheritance of effects caused by environmental pollutants is called epigenetics. While some toxins may not mutate the actual sequences of our DNA, they can turn different genes on and off. These chemical changes in gene expression are called epigenetic effects, and can be heritable. When epigenetic effects are caused by environmental pollutants such as pesticides, the negative effects of exposure can be passed on to future generations. The scientific term for this is Environmental Epigenetic Trans-generational Inheritance, and is defined as “germ line transmission of epigenetic information between generations in the absence of direct environmental exposures.”

Many studies have documented the inheritance of environmentally caused diseases. For instance, one study looked at the health effects of the fungicide vinclozolin in rats. Researchers found that contact with vinclozolin resulted in several defects, such as male infertility, breast cancer, kidney disease, and prostate disease. These effects were passed on through the male germ line, and affected mice four generations after initial exposure.

What this means for you

While the term “Environmental Epigenetic Trans-generational Inheritance” is a bit of a mouthful, the concept is pretty simple. Coming into contact with toxic chemicals could lead to negative health effects in your children, grandchildren, or great-grandchildren. This means that if you are exposed to pollutants, you could be creating a cascade effect of health problems for your descendants.

Thus far, most of the studies on this phenomenon have been conducted on mice. As the number of studies examining environmental disease inheritance increase, you can expect to see more studies emerging documenting human-specific effects.

One of the reasons this idea is so important is that it highlights the need for multi-generational studies on the health effects of pesticides. We may not know what effects some of our newer pesticides have on health until they have been tested for multiple generations.

Be cautious about your exposure to pesticides, and keep your eyes open for new studies coming out in this area. We’ll be sure to cover them on The Organic Center website!