On Feeding the World

On Feeding the World

A great study recently came out of UC Berkeley showing that yields of organic crops are more competitive with those of their conventional counterparts than previously thought. This is good news for those of us who are trying to bust the myth that organic can’t feed the world. However, it is important to keep in mind that yields aren’t the most important part of feeding our growing population. The two biggest issues when it comes to food security are food waste and environmental sustainability. 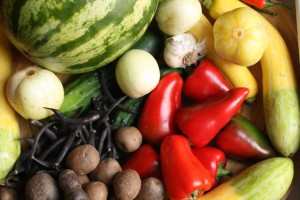 Before I talk about the importance of reducing food waste and preserving the long-term health of the environment, I want to cover the Berkeley study findings, because they are very interesting. The researchers found that yields of organic crops are higher than previously thought, and that the yield gap between organic and conventional is lower than previous studies have predicted. They also found that some organic management practices (such as multi-cropping & crop rotations) can shrink that yield gap even further. They conclude that the results "suggest that appropriate investment in agroecological research to improve organic management systems could greatly reduce or eliminate the yield gap for some crops or regions."

Claire Kremen, a professor at UC Berkeley and one of the study’s researchers, pointed out that the yield gap they found (19%) is “not only substantially smaller than previous estimates, it is surprisingly small when one considers the historic underfunding of research in organic agricultural management and in breeding of seeds for organic conditions.”  She also noted that there is a bias in past published data comparing organic and conventional yields in the direction of conventional agriculture. This means that the yield gap that they estimated, which uses the most comprehensive available data, is probably overestimated and the true yields of organic are likely much higher than even their estimate. “Coupled with our finding that crop rotation and multi-cropping improve the organic-to-conventional yield ratio, we suggest that additional agronomic research and breeding for organic could further reduce the remaining gap, leading to environmentally friendly and productive agriculture,” noted Dr. Kremen. 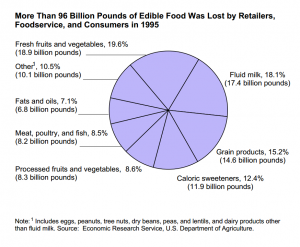 While increasing yields of organic farming is economically and environmentally important, reducing food waste is substantially more important when it comes to feeding the world. The amount of food waste far exceeds yield differences between organic and conventional crops. According to the Natural Resources Defense Council, about 40% of food in the United States goes uneaten. This means that 20 pounds of food per person is wasted every month. These losses happen at all levels of the food distribution chain:  on the farm, during post-harvest packing, processing, and distribution, at retail stores, in food services, and at the household level.

Food waste is also associated with substantial environmental problems. For example, food waste contributes to greenhouse gas emissions. When food ends up in landfills, it rots, contributing to methane. Methane is a potent greenhouse gas: it has 21 times the global warming potential as carbon dioxide!  Landfills are a major source of methane, accounting for over 20% of all methane emissions.

Food waste also results in higher nitrogen pollution, which can cause eutrophication of aquatic environments and “Dead Zones” in the coastal ocean. It also contributes to climate change, acid rain, smog, biodiversity loss, and more. According to the N-PRINT Project at the University of Virginia, reducing food waste by just 50% could decrease the nitrogen footprint of the United States by 11%.

The Organic Center is currently working with researchers who developed the N-PRINT Project to add to the body of knowledge about methods for decreasing nitrogen pollution. Our preliminary results suggest that food waste isn’t the only way to decrease nitrogen pollution. Choosing organic can also reduce the amount of reactive nitrogen released into the environment! 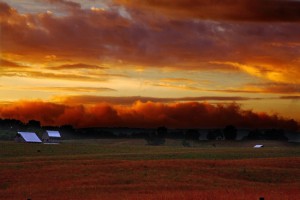 Another important issue to consider when it comes to feeding the world is the long-term ability of the land and other environmental biotic and abiotic factors to sustain the growth and health of crops. Several environmental elements are critical for crop growth—and are in danger of being degraded beyond the point of health needed to sustain food production.

For example, soils health is essential for maintaining crop yields, but it is currently being degraded by the use of synthetic fertilizer. Mineral fertilizers destroy the microbial-resistant soil organic matter, which is essential for retaining water, maintaining healthy soil texture and permeability, regulating our climate, and supporting many other healthy soil functions. One of the Organic Center’s projects is currently evaluating the extent to which organic matter is being degraded by conventional practices, and quantifying the benefits of organic farming on soil health. If conventional agricultural practices continue to cause soil health to deteriorate, it will become increasingly difficult to maintain high crop yields despite the use of high inputs.

Pollinator health is another area being threatened by conventional agriculture. Bee populations have been decreasing over the past decade, which could cause serious decreases in certain crop production. Without bees, many important crops would disappear, such as apples, almonds, blueberries, cherries, avocados, and oranges. Unfortunately, pesticides used in conventional agriculture are contributing to this decline in pollinator numbers. One of the most recent studies examining honey bee health looked at the effects of neonicotinoids, a common systemic pesticide, and showed that hives treated with neonicotinoids showed a 50% over-winter mortality rate. Other studies have showed further negative effects of pesticides—such as an article published in the journal PLOS-ONE that found that combinations of insecticides and fungicides can have a negative impact on bees’ immune systems. Persistent use of pesticides by conventional farming will continue to have a negative impact on our ability to produce food, and could result in food shortages throughout the world.

How Organic Can Help 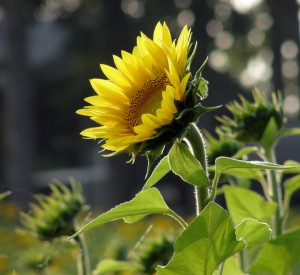 Organic management can have a positive impact on the environment and help lessen environmental degradation that threatens food security. Several studies have shown that organic agriculture can contribute to the sustainability of the environment to support continued crop growth. A study published in the journal Science, for example, showed that organic management can maintain soil health, finding that organic soils had greater biological activity, greater soil stability, more biomass and higher diversity than conventionally managed soils. Several studies have also shown that organic farming is better for pollinator health. One study, for instance, found a higher abundance of bumble bees on organic versus conventional farms. Another study showed that organic farms have higher bee abundance, while yet another study showed that bees nesting on conventional farms experience negative effects from being isolated from natural habitats, while bees nesting on organic farms were buffered from such negative effects.

The latest study from Berkeley shows interesting results, and I think the results will be especially encouraging for conventional growers thinking about transitioning to organic but worried about yields. Increased organic yields are also important for small, low-income farmers. As stated by the authors of the Berkeley study:

A focus solely on increased yields will not solve the problem of world hunger. Increased production is, however, critical for meeting the economic needs of poor farmers who make up the largest portion of the world’s chronically hungry people, and agroecological methods provide low-cost methods for doing so. Further, environmentally sustainable, resilient production systems will become an increasingly urgent necessity in a world where many planetary boundaries have already been reached or exceeded. We believe it is time to invest in analytically rigorous, agroecological and socio-economic research oriented at eliminating yield gaps between sustainable and conventional agriculture (when they occur), identifying barriers to adoption of sustainable techniques, and improving livelihoods of the rural poor.

The knowledge that crops on organic farms can be managed in a way enabling yields to approach conventional production is encouraging, to say the least. However, it is important to remember that the discussion about feeding the world should be focused around methods for reducing food waste and preserving the environment for long-term food security.