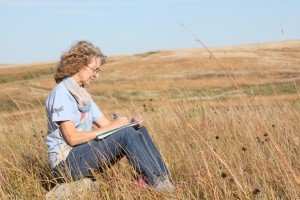 We had the good fortune to meet Twyla M. Hansen, the Nebraska State Poet Laureate.  While Hansen is a renown poet, and has published over a dozen books and anthologies, she also has a background in agriculture and horticulture.  Not only was she raised by a farming family, she also received a master's degree in agroecology from the University of Nebraska-Lincoln, and worked as the grounds manager and arboretum curator at Nebraska Wesleyan University.  She currently lives and works in Lincoln, where her wooded acre is maintained as an urban wildlife habitat and was recognized in 1994 by the Mayor’s Landscape Conservation Award.  Her poetry struck us as hitting a harmony between the beauty of ecology and the science of agriculture, so we are thrilled that she is willing to let us post some of her poems on our website.  For the next three months we will be featuring one of her poems, so check back for the next installment in August!

This first poem reminds us why we love this month. 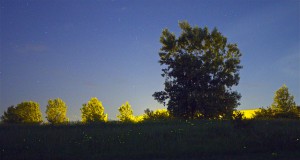 All day from the grove a chorus of cicadas.

In the distance, a thunderstorm flashes

over the city through evening clouds,

and one by one lightning bugs

to the opposite sex.  A hot wind

pumping humidity across the low hills,

into the trembling leaves of cottonwood.

under the dog's water dish.

Somewhere in this composed suburb

a couple will switch off their reading lamps

and turn in the gathering dark to face

each other.  Out in a farmer's cornfield