In light of the recent government shut-downs, I think it's important to point out some of the great work that government agencies do.  With that in mind, here is my final installment of Hidden Treasures highlighting the efforts of the USDA in relation to organic farming.

As a reminder, a few months ago I had the good fortune of visiting the US Department of Agriculture (USDA)’s Agricultural Research Service (ARS) station in Beltsville, MD.  What I found there was truly inspiring:  large projects devoted to improving organic agricultural practices, a treasure trove of information stored in the National Agriculture Library, and researchers passionate about their work.  The amount of information and work stored at the Beltsville ARS station is too much to go over in one blog post, so I broke it up into two parts; Part 1: The National Agriculture Library and Part 2: ARS Organic Research in Beltsville

After lunch I headed outside to see the field research happening at the Beltsville station with Michel Cavigelli and Steven Mirsky, two Sustainable Agricultural Systems Lab 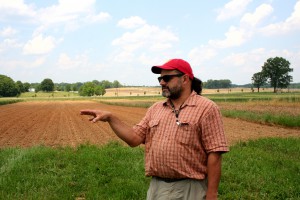 We visited Michel’s research sites first.  He is the lead scientist on the Farming Systems Project (FSP), which was established in 1996 to evaluate the sustainability of different farming systems, such as conventional, organic, no till, and a variety of crop rotations.

One of his projects examines the effect of crop rotation length on economic stability.  The price premiums associated with organic crops are attractive to many grain farmers, but these premiums come at an economic risk due to uncertainties in net returns.  Michel and his research team addressed these risk issues by examining the role that crop rotation plays in the economic performance of a farming system.  They took six years of data from the long-term FSP cropping systems study, comparing three different organic cropping system lengths:  two, three, and four to six year rotation lengths.   They found that the short two year rotations provided the greatest opportunity for short-term returns, and were often adopted by farmers recently converting to organic production.  The four to six year rotations, on the other hand, which were the longest and most diverse of their observed rotations, had economic returns with the most stability.  This type of rotation was likely to be adopted by farmers who had used organic methods for a long time, as economic stability proved more attractive to this group than short-term, higher-risk returns.  For more information about this study check out the paper they published in Renewable Agriculture and Food Systems. 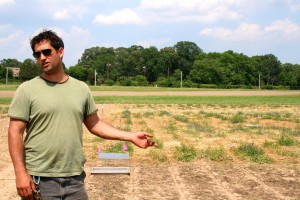 After looking at Michel’s research plots we visited one of Steven’s current projects, examining cover crop mixes for organic no-till production.  Steven’s plots consist of long crop rows with thick residual cover crops that are knocked over after senescence and sliced through for crop seed planting.  Steven is looking at combinations of cover crops that will reduce N2O emissions, preserve soil health, reduce weed growth, and increase economic viability by increasing yields and decreasing the cost of production.  Last year, for instance, he published a study in collaboration with ten other researchers detailing best management practices for cover crop-based organic no-till systems in the mid-Atlantic region.  The paper gives a thorough look at successful organic no-till management, going over topics such as how to balance maximum cover crop biomass to ensure optimal weed suppression with methods for crop establishment, the use of cover crops to optimize soil moisture, and methods for managing soil fertility.  It also addresses insects that attack crop seeds and seedlings, and discusses species-specific challenges to weed management.  Steven also mentioned the potential of no-till organic farming methods for carbon sequestration and its role in decreasing climate change pressures.

On my short visit I was only able to see a small fraction of the work getting done in organic systems at ARS.  There are a large number of studies on organic systems being done throughout the country by ARS researchers, and this number may increase in the near future.  Matt Smith mentioned that the focus on and interest in organic systems is growing in the USDA, so keep your eyes open for more studies coming out of the ARS system in the organic field!