Not Skin Deep: The benefits of organic go beyond the peel

Not Skin Deep: The benefits of organic go beyond the peel

Lately, I’ve been noticing a food blog trend suggesting that buying organic is less important for fruits and vegetables that can be peeled. Unfortunately, the benefits of organic are not skin deep!  The misconception that peeling produce can give the same advantages in pesticide avoidance as choosing organic does not take several facts into account, such as the presence of pesticides inside produce and the use of systemic pesticides.

Pesticides don’t always stop at the peel. While the peel can act as a barrier that slows pesticide absorption, some pesticides can penetrate deep into the fruit or vegetable. Unfortunately, some pesticides can even move across even thick-skinned fruit such as citrus and bananas. One study found that phenoxy herbicides such as 2,4-D had some of the highest abilities to transfer through the peel. This is especially worrisome, because 2,4-D has been associated with health problems such as development of non-Hodgkin’s Lymphoma and reproductive dysfunction. 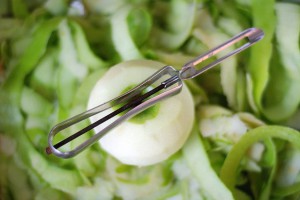 The fungicide imazalil also has a high diffusion rate, and can thus pass through peels easily. Research has shown levels of this pesticide in the pulp of produce such as peeled apples. This is another scary chemical to be exposed to, because studies have found it to be genotoxic even at low doses, and it is classified as a likely carcinogen by the Environmental Protection Agency's Draft Guidelines for Carcinogenic Assessment. Other studies have found that imazalil can have negative effects on reproductive health, and exposure in utero can cause neurobehavioral problems.

The ability of pesticides to pass through the peel can be measured by transfer factors. Transfer factors are calculated as the ratio of residue concentration in the processed commodity (in this case, the peeled produce) to that in the raw, unprocessed commodity (the fruit or vegetable with the peel on it). These factors have been calculated by several studies, and many of them are published in the book Pesticide Residues in Food and Drinking Water: Human Exposure and Risks. One highlight of the list is a transfer factor of 20- 40% in washed, peeled apples. 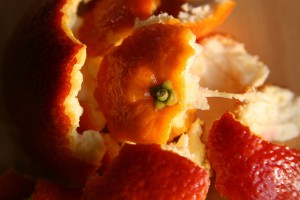 Some water soluble insecticides can also be absorbed by plants and distributed systemically through all parts of the crop. These pesticides, called “systemic insecticides,” are transported by the plant’s vascular structure throughout its tissues. Because these pesticides can be transported throughout the plant so easily, they are not stopped by the peel of the fruit or vegetable. 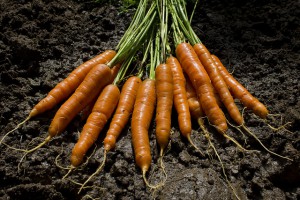 Neonicotinoids are one of the most commonly used systemic insecticides. It is chemically similar to nicotine, and is often applied to seeds, subsequently becoming systemic throughout the growing plant. These chemicals can have toxic effect in humans. One recent report by the European Food Safety Authority (EFSA) concluded that neonicotinoids can damage the human nervous system, especially brain areas associated with learning and memory. Additionally, neonicotinoids have been in the news lately for their negative effect on bees, and they have also been linked to biodiversity decline in vertebrates. For example, a study published in the Journal of Environmental Immunology and Toxicology revealed that neonicotinoid pesticide use is linked with plummeting wildlife populations in addition to bee declines. Researchers found that infectious disease spread in fish, amphibians, birds, and bats coincides with neonicotinoids’ ability to suppress immune system function.

While peels can act as a barrier for some pesticides, most toxins are able to move through the peel into the flesh of the plant. This means that avoiding pesticides is not as easy as peeling your produce. If you’re looking to avoid all pesticide residues it’s still important to choose organic!