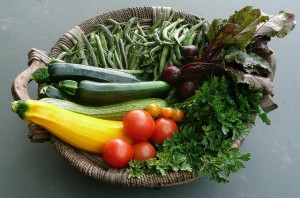 The nutritional differences between conventional and organic crops have always been a much debated topic, but recent studies have been increasingly showing the benefits of organic.  For example, a new meta-analysis out of the United Kingdom (UK) and published in the British Journal of Nutrition analyzed over 300 studies, and concluded that organic crops have significantly higher antioxidant levels when compared to conventional crops.

While increasing levels of individual antioxidants might not sound like it would change your overall nutritional intake, these results do have some meaningful real-world implications. Based on the findings of this study, if an individual were to switch from a conventional to an organic diet, he or she could achieve a 20-40% increase in crop-based antioxidant intake without a simultaneous increase in caloric intake. This means that for the same amount of food, eating organic delivers a significantly higher dose of health antioxidants. To translate this into a more understandable quantity, the amount of extra antioxidants you would consume every day by eating the recommended five servings of organic instead of conventional fruit and vegetable would be equal to one to two whole servings of conventional fruits and vegetables!

There are two leading theories about why organic fruits and vegetables produce higher antioxidant levels than their conventional counterparts: the oxidative stress hypothesis and the growth-differentiation balance hypothesis.

The oxidative stress hypothesis centers around the fact that many antioxidant compounds that are nutritionally beneficial for humans are actually created in response to oxidative stress that the plant experiences. This stress can be caused by many environmental factors, such as herbivory by insects, low nutrient levels, etc. Because crops that are grown organically are not sprayed with synthetic pesticides or high levels of manufactured fertilizer, they experience more stress than conventional crops, and thus produce higher levels of antioxidants in response to that stress. 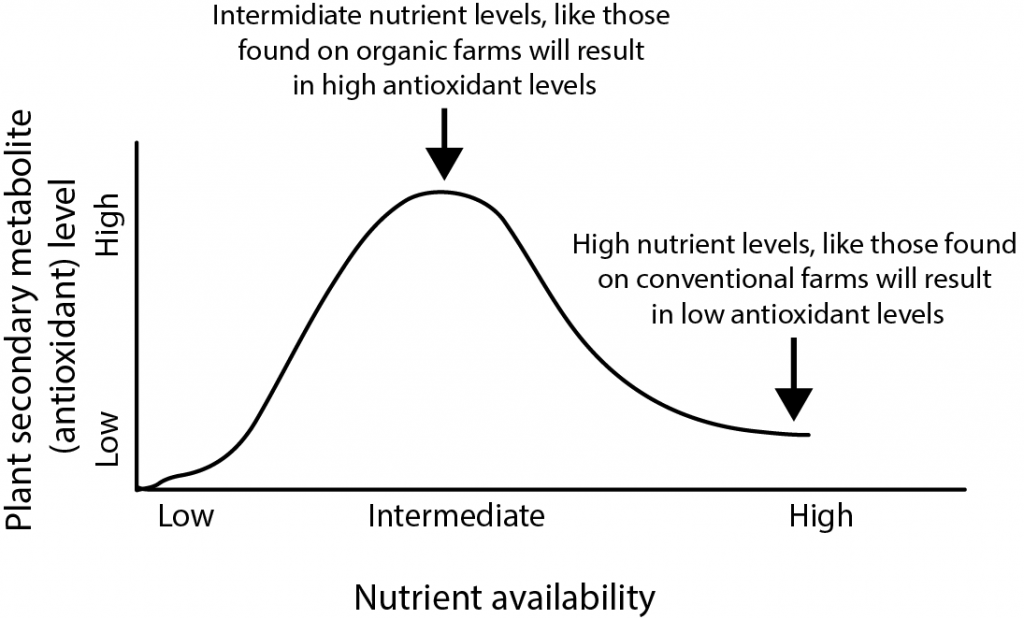 The growth-differentiation balance hypotheses, on the other hand, focuses on how plants allocate their limited resources such as water and nutrients. Are resources spent on creating new plant tissue, or do they get spent on creating secondary metabolites such as antioxidants to protect the plant tissue they have already grown?  This hypothesis states that in high nutrient environments (such as the conditions on conventional farms where synthetic fertilizer is used), plants will spend their resources creating new plant tissue rather than secondary metabolites. In less rich conditions, however, growth is limited by lack of nutrients, so more resources will be available to be spent on secondary metabolites. Thus, as nutrient levels decrease from high to intermediate, antioxidant levels actually increase. 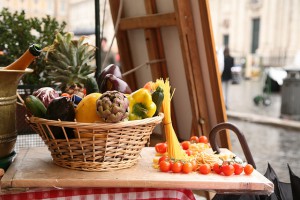 Why this Study Succeeds

In 2012, the publication of the Stanford study, which failed to find significant differences in nutritional content between the two farming systems, escalated the discussion of nutrition in organic versus conventional food to an international level. Many researchers found flaws in the Stanford study, and have been conducting studies that re-evaluate the topic from a more inclusive, statistically accurate standpoint.

This study corrects many of the flaws that were present in the Stanford study.  For example, one of the main reason that this study was able to find statistical differences between organic and conventional crops while other studies (such as the Stanford study) have failed is that the UK meta-analysis included a larger number of peer-reviewed articles. Previous studies used a more limited number of studies and data-sets, which decreased the statistical power of those meta-analyses. Additionally, previous studies used different statistical techniques that weren’t as well suited for the type of data they were looking at. This study used weighted meta-analyses based on standardized mean differences, which is an approach that is recommended when combining data from studies that measure the same parameter (e.g., the major phenolic compounds found in different crops), but use different scales.

Other Health Benefits of Organic

The UK study not only found that organic crops had higher antioxidant levels than conventional crops, but that organic crops have lower levels of toxic metals and lower pesticide residues. Specifically, they found that organic crops had on average 48% lower cadmium (Cd) levels than conventional crops. Cadmium is a highly toxic metal that can cause kidney failure, bone softening, and liver damage. Cadmium can accumulate in the body, so even at low levels, chronic exposure can be dangerous. Its toxicity is such that it is one of only three toxic metal contaminants (the other two being lead and mercury) for which the European Commission has set maximum residue levels (MRL) in foods. They also found that conventional crops had pesticide residue levels that were four times higher than organic crops. Many previous studies have found similar results, meaning that the restrictions organic standards put on pesticide use really are protecting people from exposure to pesticide residues!