Originally posted on RootStock at: http://rootstock.coop/issues/organic-dairy-theres-no-controversy/ 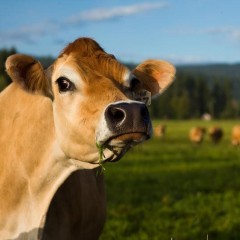 One of the most exciting studies to come out this year details the nutritional benefits of organic dairy.  The study, which was published by The Organic Center’s past Chief Scientist and current research professor at Washington State University, Chuck Benbrook in collaboration with four other researchers, shows that organic milk has a healthier nutritional profile than conventional milk.

While humans are evolutionarily adapted to an optimal omega-6 to omega-3 ratio of between 1:1 and 2:1, Western diets are high in omega-6 fatty acids, and low in omega-3 fatty acids, resulting in an average ratio of 15:1 to 16.7:1. This asymmetry in fatty acid profiles has been linked with many diseases, such as cardiovascular disease, cancer, and inflammatory and autoimmune diseases. Low omega-6:omega-3 ratios, on the other hand, suppress these conditions. For example, one study found that a ratio of 4:1 was associated with a 70 percent decrease in mortality due to cardiovascular disease. This study also found that low ratios of omega-6 to omega-3 fatty acids suppressed inflammation in patients with rheumatoid arthritis, and reduced asthma severity. Other studies have showed how low omega-6:omega-3 ratios result in a decreased risk of breast cancer.

The idea that organic dairy is healthier than conventional dairy is not new.  For example, a study published in the Journal of Dairy Science in 2006 showed similar results when they looked at milk samples in England.  The study concludes that “organic dairy farms in the United Kingdom produce milk with a higher omega 3 fatty acid content throughout the year.”

What’s so exciting about the research that was published this month by Dr. Benbrook et al. is that it’s the first time that researchers have taken a long-term look at how farming practices affects milk quality throughout the United States.  The study itself was done over an entire year, and took 220 organic and 164 conventional samples into account from dairies around the United States.

Other Benefits of Organic Dairy

If you’re looking for more reasons for why organic milk is better for you than conventional milk, there are several studies showing that by drinking organic milk, you can avoid exposure to dangerous pesticides, growth hormones, and antibiotic-resistant bacteria. For example, a study out of Cornell showed that bacteria collected from dairy herds on conventional farms were more resistant to antibiotics than those on organic farms. There are also numerous studies about the environmental benefits of organic dairy farming, such as this study out of Germany showing that organic dairy farming emits around 200 grams less CO2 per kilogram of milk than conventional farms with the same milk yield.

In the light of so many studies about organic dairy, there is no controversy about its superiority over conventional dairy products. Choosing organic allows people to benefit from the improved nutritional profile, while avoiding potential hazardous compounds. These are important facts to keep in mind when you’re browsing the grocery aisles.