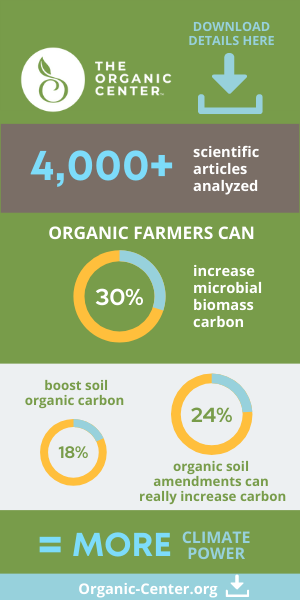 Organic agriculture’s proven ability to lock carbon away in the soil is a critical tool for combatting climate change. Now a new study directed by the University of Maryland in collaboration with The Organic Center, digs down into the specific ways that organic farmers can take their climate change fighting power to the next level.

Lead by Professor Kate Tully and Dr. Rob Crystal-Ornelas, researchers analyzed over 4,000 scientific articles to put numbers behind the soil carbon-building techniques that organic farmers use, and to identify the best strategies for carbon sequestration. The results of this meta-analysis, published in the scientific journal “Agriculture, Ecosystems and Environment,” show that by adopting certain best management practices, organic growers can significantly boost the amounts of carbon captured in their soil – upping their soil organic carbon by an average of 18 percent, and increasing microbial biomass carbon by an average of 30 percent above organic’s normal carbon-storage.

“This important study helps amplify organic’s advantage when it comes to mitigating climate change and building soil health by quantifying the carbon sequestration potential of specific organic soil management practices,” said Dr. Jessica Shade, Director of Science Programs for The Organic Center. “The study is the first of its kind – looking within organic management to not only highlight the areas where organic excels at locking greenhouse gas in the soil, but also identifying the areas that have the biggest beneficial impact, enabling organic growers to maximize their ability to fight climate change.”

“Our meta-analyses provides a holistic view on the relative impact of various Best Management Practices on Soil Organic Carbon and Microbial Biomass Carbon concentrations within organic farming systems. While previous meta-analyses comparing organic and conventional farms provide strong evidence to support organic farming as a means to improve soil health and achieve agricultural sustainability, our meta-analysis goes beyond that and suggests the need to adopt specific Best Management Practices within organic farming systems to optimize soil health improvements,” said the authors of the study.

The project builds on the extensive work The Organic Center has completed to support soil health and climate change mitigation. After a ground-breaking largescale study with Northeastern University in 2017 showing that organic soil management sequesters significantly more carbon in the soil, the Center has built a network of studies that fit together to provide critical information for battling climate change.

As a companion piece to the published scientific study, The Organic Center has developed a report titled “Maximizing carbon sequestrations in organic system’ (we need link) that succinctly describes the findings and puts them into perspective with other research.

The study looked at three best management practices: the use of organic soil amendments, conservation tillage and cover crops. While all three farming practices boosted carbon sequestration, the study found that using best practices in organic soil amendments like compost and manure had the biggest impact on carbon sequestration, and in a short period of time.

According to the study, using best practices when it comes to biological soil amendments boosts carbon sequestration by an average 24 percent. And because much of that carbon was found in the top 20 inches of soil, using organic amendments is one of the most impactful strategies to quickly replenish carbon back into the soil, which improves soil health and builds resilience to climate changes. The importance of soil amendments isn’t a surprise; past research has estimated that fertilizer accounts for around 75 percent of total agricultural greenhouse gas emissions.

The terms soil amendments and fertilizer are often used interchangeably but they can perform very different functions. Soil amendments condition the soil; they enhance the texture of the soil which enables roots to grow deeper and stronger, and water infiltration to improve. While doing so, they can also provide nutrients to the plant. Synthetic fertilizers provide nutrients without improving soil texture quality, and soil texture quality is key to the amount of carbon a soil can store.

The authors of the study pointed to the need for more research to look at the impacts of other best management practices on carbon sequestration, noting “critical evidence gaps in research on organic farming practices.”

“Very few published articles included experiments that evaluated the relative effect of crop rotation length and diversity on soil health metrics. Future research that synthesizes data on such under-researched Best Management Practices within organic farming systems … will shed much needed light on the ways that Best Management Practices either separately or in combination influenced soil health in organic farming systems,” said the study.

The Organic Center is contributing to that need. Looking toward the future, The Center has several ongoing projects that will leverage the findings from this project. A project in collaboration with the University of California Berkeley connects organic farm practices for managing carbon sequestration and soil health to farmer yields. Another project, in collaboration with Harvard University, takes a look at the climactic impacts of organic agriculture from cradle to grave, identifying the positive aspects that organic has to offer mitigation.

“Our past work shows that organic agricultural practices increase overall carbon sequestration, and this new work pinpoints specific practices that farmers can adapt to be even more effective in fighting climate change,” said Dr. Shade. “We want to do everything we can to help organic and the rest of agriculture fight the life-threatening challenge of climate change. Organic can be a part of the solution.”