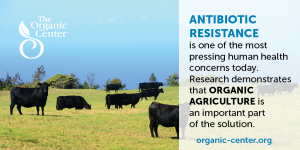 Choosing organic is the best choice consumers can make to combat antibiotic resistance and protect themselves from antibiotic-resistant bacteria, a review paper from The Organic Center concludes.

Of particular concern in conventional agriculture is the routine use of antibiotics not only to treat infections but to increase the growth and feed efficiency of animals and as a prophylactic agent. Organic livestock, in contrast to conventional, are raised without the use of antibiotics, which are prohibited by federal organic regulations unless medically necessary. Animal health is one of the tenets of organic. If medically necessary, a sick animal on an organic farm must be treated, but then removed from the herd, and its products—such as meat or milk—may not be sold as organic.

In conventional agriculture, livestock manure disposal is one of the biggest ways antibiotic residues and resistant bacteria enter the environment.

“Organic livestock production, which prohibits the use of antibiotics for growth promotion or prophylactic purposes, provides a compelling example of successful, profitable operations and demonstrates the ability of livestock farms to operate without substantial antibiotic use. Organic provides a model for how agriculture can contribute to a solution,” says Dr. Jessica Shade, Director of Science Programs for The Organic Center, who is a co-author of the review with her colleague Dr. Tracy Misiewicz.

The paper looks closely at the role of antibiotic use in conventional agricultural livestock production. It covers the mechanisms by which resistance develops in bacteria, the role that modern-day agricultural practices play in exacerbating the problem, and how organic agriculture provides a simple and effective means to combat the rise of antibiotic-resistant bacteria and to protect the health of consumers.

“Because organic production methods are available to all farmers, they can be incorporated into any livestock operation to combat resistant bacteria,” Dr. Shade says.