Pollinator Problems: How pesticides are hurting our beneficial insects

Pollinator Problems: How pesticides are hurting our beneficial insects 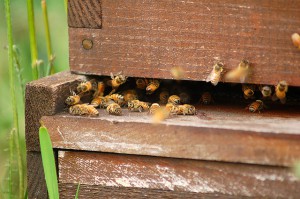 Honey bee population decline has been receiving a lot of attention lately, and with good reason. Without bees, many important crops would disappear, such as apples, almonds, blueberries, cherries, avocados, and oranges. Some of the awareness campaigns addressing honey bee loss have been especially poignant, such as the pictures of a Whole Foods in Rode Island that pulled all bee-dependent fruit and vegetables off its shelves for a day, revealing a near-empty produce department. There are many studies examining the cause behind the recent decimation of honey bees, also known as Colony Collapse Disorder (CCD). In this blog, I’ll review some of the newest studies about the factors affecting CCD, and how organic farming can help mitigate these damages.

One of the most recent studies examining honey bee population declines was published in the journal PLOS-ONE. The research shows that a combination of insecticides and fungicides can have a negative impact on bees’ immune systems, resulting in decreased ability to resist infection by a parasite called Nosema ceranae that has been implicated in CCD. Researchers found that the pollen bees collect to feed to their larvae contain an average of nine different pesticide contaminants, and made bees three times as likely to be infected by the parasite. This highlights the fact that cocktails of pesticides can be extremely toxic to pollinators. Even when any one pesticide is not present in a high enough dose to be toxic to insects, these chemicals in combination can have novel adverse effects on bees.

There have also been several studies about neonicotinoid pesticides and their toxicity to bees. Neonicotinoids—a type of pesticide often applied to seeds—become systemic throughout the growing plant. Bees are exposed to the chemical through air seeding of fields, which create neonicotinoid dust clouds, through drops of sap on the outside of plants, and in corn syrup (often fed to overwintering bees) created with conventional, neonicotinoid-treated corn. This class of insecticide has been held responsible for massive bee die-offs, and researchers continue to document proof of these chemicals’ toxicity to bees. For example, a study by Chensheng (Alex) Lu, a professor in the Department of Environmental Health at Harvard School of Public Health, showed that 94 percent of hives fed corn syrup containing low doses of neonicotinoids died within 23 weeks. Another study, published in the Bulletin of Insectology, showed that aerial corn planting after corn seeds had been treated with neonicotinoids resulted in acute poisoning of bees. A study published in Science showed that bumblebees treated with low levels of neonicotinoids experienced a reduced growth rate and an 85 percent reduction in queen production, even after hives were no longer directly exposed to neonicotinoids.

In the face of all the research showing links between pesticide exposure and bee population decline, I find it baffling that many agencies still claim the cause of colony collapse disorder (CCD) is unknown. Pesticides were developed to kill insects, so the fact that they are decreasing pollinator numbers should be no surprise. Unfortunately, there seems to be a disconnect between the idea of killing pests and that of harming beneficial insects. For example, I was speaking with a reporter a few weeks ago about how bee populations have been negatively impacted by neonicotinoid use. The reporter pointed out that, while she had seen several scientific articles showing adverse bee health effects of neonicotinoid exposure, she hadn’t seen any evidence of why neonicotinoids would be toxic to bees. When I explained that neonicotinoids had been developed with exactly that purpose in mind – to harm insects – she exclaimed “Oh!  That makes sense!”  While it may be obvious upon consideration, I think that many people forget that there is nothing unexpected about insecticides damaging honey bee populations.

One of the easiest ways to help the bees is by choosing organic. Organic farms not only avoid using pesticides that are toxic to honey bees, they also provide habitat and greater numbers of flowers for bees to feed on. Melody Meyer, Vice President of Policy and Industry Relations for UNFI, wrote a blog covering the issue, highlighting study findings that bees fare better on organic versus conventional farms.

If you want to do more for our friendly pollinators, you can even plant a bee garden in your yard. Bees are attracted to blue, purple, and yellow, so spread some seeds, and add a splash of color (and a little buzz) to your home!