Hash browns are supposed to be easy to make from scratch, but despite soaking, draining and squeezing grated potatoes to get rid of their starch, hash browns can still come out stodgy and sticky unless you use a gallon of oil to fry them. This is the one instance where making hash browns from scratch can be pretty foolproof and healthy. Just be warned, like waffles, these take a long time to make, so have a snack first thing if you’re really hungry before starting this project.

A review paper in the American Journal of Potato Research  shows how the potato provides an important contribution to global nutrition and food security. Many varieties of potatoes are a good source of vitamin C and vitamin B6 as well as a number of micronutrients and fiber.

If you love hash browns, and are a fan of waffles, then this recipe will be a ton of delicious fun.Be sure to grab organic potatoes when you can to reduce pesticide exposure. 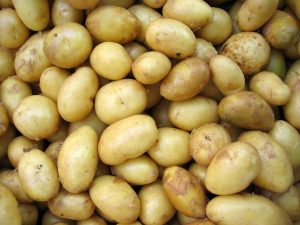 **You need a starchy potato for this recipe, as waxy potatoes will not work. Also, keep in mind that potatoes shrink a lot in volume, so plan your quantity accordingly.

There are several different ways you can prepare hash brown potatoes from scratch:

The first method is preferred, though it takes more planning and prep.The second method take less prep, but more time cooking in the waffle iron. It also releases more water, increasing the chances for a sticky, stodgy texture.

Method 2: Grate raw potatoes. Soak for 5-10 minutes in cold water. Strain and turn out onto a paper or kitchen towel and ring out to remove as much water as possible. Salt generously to taste.