Slow-roasted tomatoes with garlic and herbs

Slow-roasted tomatoes with garlic and herbs

Looking for a new way to use fresh tomatoes from the farmers’ market or the herbs from your garden? Try our slow-roasted tomatoes with garlic and herbs! Baking tomatoes slowly concentrates the sugars, giving them irresistible flavor. These gems can be served on top of crusty bread as an appetizer or used to spruce up the dullest pasta sauce. Make sure to increase your antioxidant intake by choosing organic tomatoes when you make this recipe.

A study published in PLOS ONE found that organically grown tomatoes were more nutritious than conventionally grown tomatoes. Antioxidant levels in organic and conventional tomatoes were compared at three different stages: immature, mature, and harvest-ready. Organic tomatoes had higher levels of vitamin C and sugars and up to 139% more phenols including lycopene. The authors believe that organic farming places a certain amount of stress on the plants. The plants then respond by creating defensive compounds such as Vitamin C. 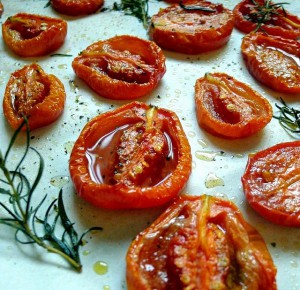 Cut tomatoes in half and toss in a bowl with olive oil, whole garlic cloves and thyme until everything is completely coated. Arrange the tomatoes cut side down in a non-reactive baking pan. Place garlic and thyme in between the tomatoes and drizzle the remaining olive oil from the mixing bowl over the tomatoes.

Place the baking pan in the oven and bake for 5 hours.

Eat your warm roasted tomatoes and garlic on bread, as a pizza or salad topping, or tossed into tomato sauce.