Whether you’re in charge of bringing desert to the next BBQ or satisfying your own sweet tooth, this chocolate peanut butter pie is for you! It is rich and creamy, may possibly be one of the easiest deserts ever to make, it’s much higher in protein and lower in fat than most chocolate peanut butter pie recipes that call for cream cheese or cool whip, AND it’s vegan (although you would never know it). What could the secret ingredient possibly be? Tofu! However, when making this fabulous pie, be sure to choose certified organic tofu – made from organic soybeans - to protect yourself from pesticide residues and increase the nutritional value. 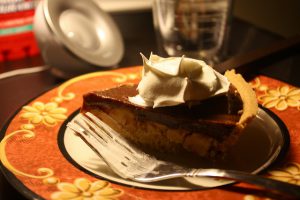 If you are making your own graham cracker crust, place graham crackers into a food processor until they are completely ground up. In a mixing bowl, combine the ground graham crackers with the melted coconut oil and stir well. Pour the mixture into an 8-inch pie pan and firmly press the mixture onto the bottom and sides of the pie pan. Chill in the refrigerator for about 2 hours.

Pour the filling into your graham cracker pie crust and chill for about 4 hours. Top your pie with whatever toppings you like just before serving.