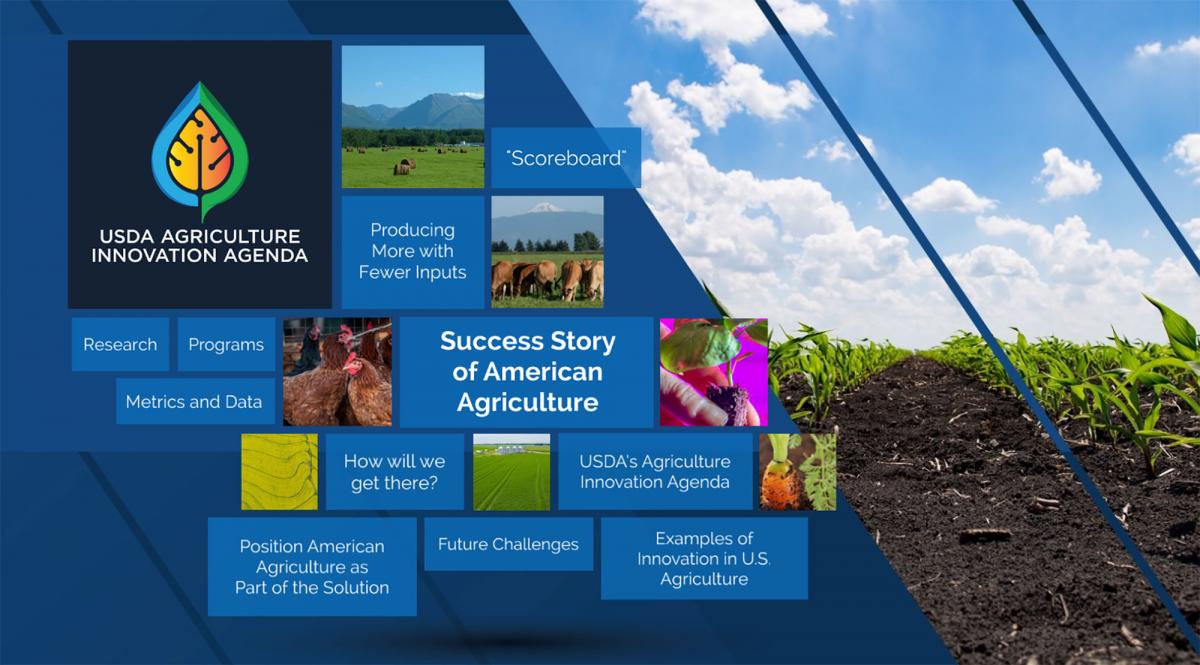 The Organic Center commented on the USDA’s Agriculture Innovation Agenda, providing input on the objectives and opportunities leading to research goals and informed product goals to facilitate transformative breakthroughs to enable U.S. agriculture to meet the Department’s goal of increasing agricultural production while cutting the environmental footprint of U.S. agriculture.  The Organic Center comments focused on how organic can be a leader for agricultural innovation, and how the long-term sustainability provided by organic practices will be critical for maintaining long-term food security. Specifically, they highlighted opportunities in research around soil health, climate change, pollinator health, agricultural economics, and increasing yields in organic, while noting policy changes needed to advance these innovations. You can read the full comments below.

Organic is a leader in agricultural innovation

Organic agricultural research drives the development of innovation in agricultural systems, because farmers and researchers working within organic systems must think outside of the box to develop novel solutions to common agricultural problems. For example, the National Organic Standards’ strict regulations on the use of synthetic chemical herbicides for weed prevention has driven the development of numerous innovate and sustainable technologies. One such technology in development now is a hydraulic weed seed crusher that was developed to control weeds in the seed bank. Furthermore, the high efficacy of many of these technologies combined with their minimal environmental impact and cost effectiveness for farmers has led to their increased adoption in conventional systems as well.

Challenges and Opportunities to Increase Productivity and Decrease Environmental Footprints

The Organic Center is continually collecting information on research needs from multiple sectors of the organic community. We conduct industry roundtables, work with the Organic Trade Association’s Farmers Advisory Council, meet with professors on our Science Advisory board and hold one-on-one meetings with individual companies, farmers, professors, and consumers. Based on feedback we’ve received during our outreach efforts some of the most pressing research gaps that must be addressed over the next ten years to increase productivity while decreasing environmental footprints include manure and compost safety, methods for increasing biodiversity and pollinator health in agricultural systems, methods for increasing soil health, development of agricultural practices that reduce greenhouse gas emissions and contribute to climate change mitigation, research to develop innovative pest control methods that support pollinator health, the inclusion of socioeconomic considerations in future research, and methods for increasing yields. While The Center is pursuing projects in many of these areas much work is still needed.

Soil health is critical for maintaining agricultural yields over time, and is the backbone of our food security.  Organic can act as a model for agriculture on how to build soil fertility and biotic community over time.  For example, a study published in Science found that, over a 21-year time period, organic soils have greater biological activity, greater soil stability, more biomass and higher diversity than conventionally managed soils [1].  Another study found that organic management results in better soil nutritional and microbiological conditions, higher levels of total nitrogen, nitrate, and available phosphorus, more microbial biomass, and more enzymatic activity (acid phosphatase, protease, and dehydrogenase) [2]. Future research should focus on the connections between soil health and microbial communities, water quality, plant productivity, and nutrition/human health. Specifically, in the cluster area of digital/automation research could provide outcomes that help identify and improve intra-field areas with low soil health, reduce fertilizer runoff and leaching, and manage soil microbial communities. Additionally, soil health is a critical factor in systems-based farm management, as soil is the one of the underlying components of understanding the nature of interactions among different elements of the food and agricultural system.

Soil health is tied to climate change, which is something that will unquestionably impact agriculture over the next 10-30 years.  Organic can also be a part of the solution to mitigating climate change through its increased energy efficiency.  Research investigating the efficiency of organic has found that organic farms are more energy efficient than their conventional counterparts [3].  One of the reasons for this is that the production of synthetic fertilizer used in conventional practices is extremely energy intensive.  One study showed that organic farming is more energy efficient than conventional farming for almost all crops when comparing the same amount of farmed area [4]. Even when yields are lower in organic vegetable production, the absence of fertilizer input makes up for energy costs so that energy used for the same crop output is still lower or similar to conventional farming.

This energy efficiency is important when it comes to mitigating climate change, which contributes to extreme weather events like droughts.  In addition to the energy efficiency of organic production, organic farms also help sequester carbon and release lower levels of greenhouse gases.  For example, a recent analysis of data from around the world found that, on average, organically managed soils release 492 kg less carbon dioxide per hectare per year than conventionally managed soils [5].

Organic farming is not only important for climate change mitigation; organically managed crops also allow for better adaptation to climate change.  Anderson and Miller claim that genetically modified crops can be crafted to withstand droughts, but the page they link to shows that only one drought-tolerant biotechnology trait has been able to be developed for corn.  Rather than relying on experimental biotechnology, organic farming allows for greater resilience to drought by conserving soil moisture.  Organic management of soils can improve their water-holding capacity by up to 100 percent [6].  This was demonstrated in a research trial that compared the performance of organic and conventional cropping systems in drought years.  Researchers found that organic management of crops in drought years yielded up to 196% in relation to conventional crops [7].

Specific research questions in this category include livestock forage management, water usage, seed breeding for resilience in different regions, and the role of crop diversification in protecting against losses from extreme weather changes. Overall, these questions would help better understanding how climate change will continue to affect farmers, how farmers can be more resilient to those changes, and how organic farming practices can be incorporated into conventional systems to help mitigate future climate change. Taking a systems-based farm management approach will be key to understanding climate change mitigation and adaptation, as climate change is a multifaceted issue influenced by most agricultural practices.

Bee populations have been declining at alarming rates, impacting affecting seventy-five percent of all crops, valued at more than $16 billion. The decline in pollinator numbers has the potential to not only impact the world’s biodiversity, but also threaten our economy and food security. Fortunately, organic farming practices can provide critical solutions that not only decrease risks to pollinators, but actively support the growth and health of our pollinator populations.

The Organic Center released a report using organic as a model for supporting pollinator populations and steps that growers can take to foster healthy pollinators [8].  Organic farming requirements prohibit the use of harmful synthetic pesticides and toxic seed treatments while promoting abundant pollinator habitat and plentiful diverse pollinator food sources. These actions have resulted in higher pollinator abundance and diversity on organic farms. Many techniques used by organic growers can be adopted by all growers to support pollinator health, such as crop rotations, hedgerow planting, and the use of integrated pest management techniques.

Systems based farm management is important when examining ways to maintain and support pollinator communities, because pollinator health is synergistically enhanced by reduced pesticide use, increased nesting habitat, and varied food sources. Outcomes of these investigations would prevent a decrease in yield productivity due to reduced pollination services.

Organic agriculture can also be a part of the solution for economic sustainability in agriculture. Organic farms are 35 percent more profitable than the average farm and have higher gross receipts. Premiums paid to organic farmers can range from 29 to 32 percent above non-organic prices, which allows farmers to make a living wage.

Organic is also a major contributor to jobs in the US: sixty percent of organic businesses reported their operations had increased full-time employment during 2015.  Additionally, over 65 percent of organic farms sell in wholesale markets creating a distinct value chain in the greater food economy [9].

These benefits are especially true for rural communities.  Organic hotspots, defined as counties with high levels of organic agricultural activity whose neighboring counties also have high organic activity, boost median household incomes by an average of $2,000 and reduce poverty levels by an average of 1.3 percentage points.  225 counties across the United States are identified as organic hotspots and are as diversified as the organic industry, and represent the various kinds of organic agricultural activity and accompanying businesses: crop production, livestock production, organic processors [10].

It is especially critical for innovative research to take farmer profitability into account, because there is a risk that new technology could increase the already profound disparity between large-scale farms and smaller, less advantaged farms. Research should include issues such as accessibility of technology for small and/or low-income farms, equity around tech use and adoption, and inclusion of marginalized farming communities in the development of agricultural technology to ensure economic sustainability for a wide diversity of farmers.

While organic methods are advantageous for building soil health, mitigating and adapting to climate change, supporting pollinator communities, and enhancing farmer livelihoods, additional research is needed on increasing yields in organic. Several studies have found that using best practices can increase organic yields, and hypothesize that additional research could significantly reduce the organic-conventional yield gap [11]. Organic agricultural research is highly underfunded and there is a lack of dedicated crop breeding, nutrient or pest management research programs for organic systems. For example, one study within the United States found that only 15% of the major external research and education grants awarded by the U.S. Department of Agriculture (USDA) incorporate any element of agroecological principles [12]. Additionally, most of the projects included agroecology as a minor aspect of the research. Funded projects that emphasize agroecological research or implementation are rare. Therefore, there is a large potential to improve technologies to support organic farming and to establish field trials and experiments.