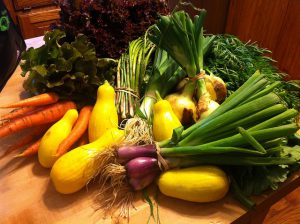 The HuffPost Op Ed by Dr. Robert T. Fraley of Monsanto provides an interesting view of organic agriculture.  Many of Dr. Fraley’s opinions highlight the importance of collaboration within the global agricultural system, but he misses the mark on some hard facts.

Dr. Fraley correctly notes that organic is an important part of the global food system.  Innovations developed by organic researchers have yielded more sustainable, healthier crops. Moreover, cutting-edge organic research has resulted in original solutions that are available to organic and conventional growers alike.  As noted by Dr. Fraley, several innovations developed by organic researchers have been adopted by conventional growers because they are more effective, economical and sustainable. Dr. Fraley is also correct to highlight that research on organic helps to overcome production challenges, but that’s only part of the story. While these production challenges are being met, organic research is also providing methods that boost food nutrition, improve long-term soil health, reduce toxic pesticide exposure, and generally protect the health of our communities and ecosystems.

Dr. Fraley’s respect for the work that goes into organic is well-deserved, but many of his statements do not accurately reflect the laws and requirements governing the organic standards. Furthermore, they propagate myths that have been disproven by recent scientific analyses.

Organic Yields and Benefits to Farmers

Instead of citing information from a peer reviewed scientific journal Dr. Fraley uses statistics from an Op Ed when he claims that “organic crop yields for major row crops are typically 30-40% less than those enjoyed by conventional farmers.”  This information is inaccurate and at odds with analysis by the scientific community. Recently published studies in scientific journals provide robust assessments of global data and show that organic yields are much higher than claimed by Dr. Fraley’s source.  According to a study by researchers at the University of California, Berkeley, “appropriate investment in agroecological research to improve organic management systems could greatly reduce or eliminate the yield gap for some crops or regions."  The organic sector has already seen benefits from the small amount of funding directed toward overcoming challenges to organic production, and several studies have found that when best management practices are utilized they can result in yields comparable to conventional.

Dr. Fraley also ignores that even when organic yields are lower than conventional, organic farming is still more profitable to farmers.  One article, published in the Proceedings of the National Academy of the Sciences, found that organic farms are 22 -35% more profitable than their conventional counterparts, even when decreased yields are taken into effect. These benefits are high, even without taking into account the negative health and environmental aspects and the bigger environmental footprint of conventional farming. The authors of the study said, “We found that, in spite of lower yields, organic agriculture was significantly more profitable than conventional agriculture and has room to expand globally. Moreover, with its environmental benefits, organic agriculture can contribute a larger share in sustainably feeding the world.”

Dr. Fraley is also mistaken when he says that organic rules “are not determined by science-based regulation, but by a political process driven by advocacy and ideology.” This is a clear misunderstanding of the USDA National Organic Program process. Organic standards are built on principles of preserving human and environmental health, and changes are largely determined by new science that investigates the best practices to achieve those goals.

The organic standards describe the requirements operations must meet in order to protect natural resources, conserve biodiversity and use only approved farming and handling inputs. While the organic regulations do evolve to meet market demand, any change is carried out through a transparent regulatory process under strict USDA oversight. A specific review criteria established by the Organic Foods Production Act of 1990 regulates what inputs are allowed in organic farming and food. This process requires the National Organic Standards Board (NOSB), a federal advisory committee, to review USDA-contracted Technical Report findings and current science to inform all decisions and recommendations made to the Secretary of Agriculture. NOSB must determine the availability of organic or natural alternatives and investigate the impact every input under consideration may have on human health and the environment. All decisions require a two-thirds majority vote from the 15-member advisory board and comment periods are provided to organic stakeholders to help further inform the process. The law also requires the final decision made by USDA to be done so in consultation with the Secretary of Health and Human Services and the Administrator of the Environmental Protection Agency.

On the subject of food safety, Dr. Fraley is off base.  Organic goes above and beyond conventional regulations to ensure product safety.  There are a multitude of safety regulations imposed on organic growers in addition to federal standards.  For example, the National Organic Program requires organic farmers to demonstrate a plan that describes all aspects of the farm, including measures taken to prevent pathogenic contamination of crops and water.  Certified organic producers and processors must also keep extensive records so they can trace their products from the field to point of sale.

With regards to the use of manure, which Dr. Fraley specifically mentions, organic is even more strictly regulated than conventional. The Food and Drug Administration currently has no guidelines for how long conventional farmers should wait following use of raw manure before they harvest their crops, which means that raw manure could be applied the day before crops are harvested; FDA deferred this regulation in the Food Safety Modernization Act for 5 years to conduct scientific research.  In contrast, no raw manure can be used in organic systems without an extended waiting period between application and harvest (i.e. 90 and 120 days), and the use of sewage sludge is prohibited in organic farming.

One of the most concerning myths propagated in Dr. Fraley’s Op Ed focuses on pesticides.  The article claims that pesticide use between organic systems and conventional systems are analogous. Nothing could be further from the truth.

Dr. Fraley states “The distinction between organic and conventional vis-à-vis pesticides is not that one uses them and the other does not; both organic and conventional farming use them. The distinction is about what kinds are used.” And we completely agree.  But while Dr. Fraley points out that both conventional and organic growers utilize natural, non-toxic materials for pest control (and this is a good thing!) he fails to address the differences between the 45% of agricultural pesticides that are prohibited from use in in organic farming. Just to highlight two examples, these pesticides include dicamba and 2,4-D which are being quickly adopted by farmers for use on GMO crops where weeds have become resistant to glyphosate, the key ingredient in Roundup, which Monsanto has been selling for 43 years. These chemicals are potentially more toxic than glyphosate and significantly more susceptible to drift, increasing the risk of contamination to nearby crops as well as human exposure. In addition to water contamination and negative impacts on wildlife, studies have linked exposure to 2,4-D with neurological disorders, and immune system suppression in humans.

There are many pest management options available to non-organic farmers, but the only way for  consumers to truly guarantee they are avoiding the toxic synthetic chemicals allowed in conventional agriculture is by choosing organic. The scientific literature supports this. Research has consistently shown organic products to have lower pesticide residues than conventional products.  A study out of Newcastle University, for example, found the frequency of pesticide residues in conventional crops to be four times higher than their organic counterparts. Another study looked directly at human exposure and found that eating just 80% organic for a week can reduce pesticide metabolites in urine by up to 90%.  These studies are the most recent additions to a wide body of literature strongly confirming that organic practices reduce consumers’ exposure to pesticide residues.

You may ask how do organic farmers manage to survive without almost 50% of pesticides available to other farmers? Organic standards require organic farmers to implement rigorous preventive systems to reduce the need for using even organic-approved materials to combat pests.  These preventative systems require the use of non-toxic, integrated pest, weed, and disease prevention plans prior to considering organically approved material application.  While organic producers are allowed to use a limited amount of naturally occurring pesticides when preventive practices fail, the limited pesticide products available to organic producers are benign and have such low toxicity levels that they are considered "exempt from tolerance" by the EPA.  Additionally, these substances are reviewed every five years by the National Organic Standards Board for new information concerning their safety.  In this way, the organic system is able to balance on farm productivity while minimizing health risks for farmers, farm workers and consumers.

In summary, while it is nice to see an Op Ed showing that being “pro-GMO” doesn’t make someone “anti-organic”, readers need to know what the science actually does and doesn’t say about organic.  Organic has an important place in feeding the world in a sustainable manner that maintains the health of consumers and farmers alike – a fact that has been supported time and again by scientific research.