Response to "Can Organic Food Feed the World?"

Response to "Can Organic Food Feed the World?" 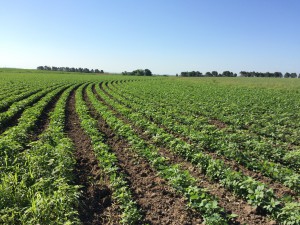 In the debate posted on the Wall Street Journal, Dr. Badgley argues against Dr. Savage about the ability of organic to feed the world. Dr. Badgley makes some excellent points in her article about organic being able to feed the world. She notes that organic systems can meet the needs of consumers, growers, and the environment, while pointing out that in addition to yields, we need to focus on environmental and economic sustainability as well as reducing food waste.  The arguments of Dr. Savage, on the other hand, miss several important points supporting the benefits of organic, specifically about the use of compost and manure and the innovation associated with organic production.

Dr. Badgley points out that the differences in crop yields between organic and conventional are not obstacles to feeding the world.  In fact, recent research out of the University of California, Berkeley, suggests that the yield gap between organic and conventional is lower than previously estimated, and could be further decreased or even eliminated entirely through the use of best management practices and further research.  The study concludes that the results "suggest that appropriate investment in agroecological research to improve organic management systems could greatly reduce or eliminate the yield gap for some crops or regions."  Even outside of small scale vegetables organic yields can compete with conventional.  For example, a study that came out this year by Kathleen Delate et al. examined long-term trials and found that organic grain crop yields can equal conventional grain crops.

The organic sector has already seen the benefits of the small amount of funding directed toward overcoming challenges to organic production, and several studies have found that best management practices can result in yields comparable to conventional.  The development of methods for reduced tillage organic systems, organic compliant materials to combat diseases, and varieties resistant to herbivory and weed pressures have enabled the organic sector to grow rapidly. 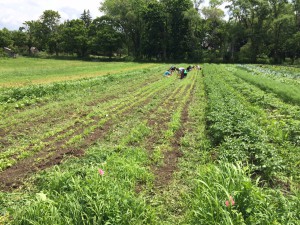 Unfortunately, the proportion of research funding going toward organic issues is still disproportionately small, and organic growers are faced with a variety of large-scale issues with a reduced number of tools to address these challenges.  This lack of funding has had a very real impact on organic producers, and translates into the reduction of yields mentioned by Dr. Savage.  With additional funding for research, tools could be developed allowing organic farmers to produce yields on par with those of their conventional counterparts.

Dr. Badgley also mentions the economic profitability of organic farming.  Indeed, several studies have found that organic production is more economically viable than conventional farming, even when lower yields are taken into account.  A recent study published in the Proceedings of the National Academy of the Sciences, for example, found that even though organic farming typically results in lower yields than conventional farming, the premium that organic farmers receives for their products makes organic 22 -35% more profitable.

As noted in Dr. Badgley’s article, organic farming maintains the long-term viability of our food system by supporting sustainability. It is critical that we take care of the land and other environmental biotic and abiotic factors to sustain the growth and health of crops.  Without preserving the health of our ecosystem, our food security will be threatened because we will not be able to uphold agricultural productivity.  For example, organic systems preserve soil health, which is essential for maintaining crop yields.  Organic farms also bolster pollinator abundance and diversity, without which many important crops would not be viable, such as apples, almonds, blueberries, cherries, avocados, and oranges.

Dr. Savage argues that the maintenance of soil health due to the use of compost results in increased methane emissions, but this argument ignores the fact that if this material were not composted, it would be sent to landfills where it would undergo anaerobic decomposition, resulting in even higher methane emission.  Discussions of climate change contributions need to take a holistic view of agricultural systems, rather than focusing on one small aspect of the farming process.  When the overall greenhouse gas emission levels from organic agriculture are compared to those of conventional agriculture, studies consistently find that organic systems are less energy-intensive and emit less greenhouse gas than conventional.  The production of synthetic fertilizer used in conventional practices, for example, is extremely energy-intensive and can result in higher greenhouse gas emissions than the use of compost, especially when the carbon sequestration of composting is taken into account.  One study that took these multiple factors into account found that the emission reduction potential by abstaining from using mineral fertilizer would be about 20%, and the compensation potential by carbon sequestration would be 40-70% of the world’s current annual agricultural greenhouse gas emissions.  Additionally, organically managed soils release lower levels of greenhouse gasses into the atmosphere than conventionally managed soils.  A recent analysis of 19 comparative studies from around the globe examining emission levels found that, on average, organically managed soils release 492 kg less carbon dioxide per hectare per year than conventionally managed soils. Findings also showed that the uptake of methane on organic farms was higher than on conventional farms.

The suggestion made by Dr. Savage that organic depends on manures and composts from conventionally raised animals is also misleading.  Much of the nutrient input on organic farms comes directly from on-farm sources, including green manure and leguminous cover crops. The nutrient additions they add from off-farm compost and manure use recycled sources of nitrogen, rather than synthesizing new nitrogen to add to the system.  As I mentioned above, this results in a significant reduction of energy use, but it also has impacts on the environment.  New reactive nitrogen has been associated with several environmental problems such as eutrophication, acid rain, and smog.  By recycling old nitrogen sources rather than adding new nitrogen to the earth’s system, organic agriculture helps prevent environmental degradation.  It is also important to note that new research has found that not only does organic contribute less new nitrogen to the global system, it also reduces the amount of nitrate runoff, thus improving water quality.

Finally, while increasing yields of organic farming is economically and environmentally important, reducing food waste is substantially more important when it comes to feeding the world. The amount of food waste far exceeds yield differences between organic and conventional crops. According to the Natural Resources Defense Council, about 40% of food in the United States goes uneaten. This means that 20 pounds of food per person is wasted every month. The simplest way to ensure that our current agricultural system is able to feed the world is to reduce food waste.

In conclusion, the piece written by Dr. Badgley hits on several important points about how the issue of feeding the world should be framed that are ignored by Dr. Savage.  Discussions about feeding the world should include a focus on how to reduce food waste, preserve the environment for long-term food security, and empower small-scale farmers who grow most of the world’s food supply.