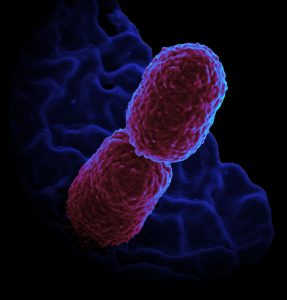 A new and deadly drug-resistant yeast, Candida auris, has been identified in 13 U.S. states and across the globe, according to the Centers for Disease Control. A recent New York Times article exposed the spread of this fungus across hospitals throughout the world, and highlighted the yeast’s potential to cause death for people with compromised immune systems. Candida auris has joined the list of “superbugs” that once responded to antimicrobial drugs, but have now gained resistance and cannot be controlled with the pharmaceutical tools we currently have, putting millions of people at risk in the United States alone. While the outbreaks of C. auris reported in the NYT are alarming, this is not new news. According to 2010 CDC data, 2 million people per year in the U.S. contract drug-resistance infections, which has led to 23,000 deaths annually. More recent estimates from a different group of researchers out of Washington State say the number of annual fatalities is closer to 160,000.

How are these germs gaining resistance? In a nutshell, long-term, frequent exposure to low doses of antibiotics and antifungal drugs causes the bacteria and fungi to adapt and develop resistance against drugs. This is linked to the over-prescription and overuse of antimicrobial drugs in our healthcare system, and also to the overuse of these drugs in the production of our food. Many antibiotics and antifungal chemicals are used in conventional dairy and  livestock production as well as the production of fresh produce. They are used to protect against diseases in farm animals, soil and plants. Resistant germs can be passed to humans on contaminated food that we eat, and through the environment via water and air (e.g. dust from animal feedlots). The NYT article implicates the use of fungicides in agriculture as a cause of the C. auris outbreaks.

In response to the NYT article, the Agroecology and Economics Research Corps (AERC) published an essay linking the use of fungicides in agriculture to the drug-resistance of C. auris as well as other deadly drug-resistant fungi. The essay provides distribution maps of the use of Azole fungicides, (1 of 6 classes of fungicides to which C. auris has developed a resistance). And not surprisingly, the distribution of Azole fungicide use in the U.S. largely matches the distribution of reported cases of C. auris infections.

The author takes a deep dive into the mechanisms of how resistance is developed, the importance of reducing the use of antimicrobials in agriculture to protect public health, and highlights the problem of current governmental policies that are promoting the expansion of fungicide use at a global scale.

Both the NYT article and AERC essay deliver a critical reminder that the list of deadly superbugs is growing, and we need to shut down drug resistance of these germs, which pose the greatest risk to people with compromised immune systems. This can be accomplished by reducing use of and exposure to antimicrobial drugs in our medical system and food production. Fortunately, certified organic agriculture prohibits the use of antibiotics and synthetic fungicides, so the growth of the organic industry will help curb the resistance of superbugs.