Higher concentrations of certain nutrients in fresh organic produce can also translate to frozen foods, a new study published in the Journal of Food and Dairy Sciences, Mansoura University reveals. The next visit to the freezer aisle for frozen veggies may warrant considering organic.

Green beans are an important source of protein, nutrients, and cash crop for export and local markets in Egypt. Eating fresh produce is often recognized for its health benefits and organic produce for containing more antioxidants, yet given it's perishable nature scientists wanted to examine this comparison further in frozen produce because of its longer shelf life.

To do this, researchers collected green beans harvested from organic and conventional farms in Giza and once cut and cleaned, sorted them into two groups: hot water blanch for four minutes and steam for six minutes.

Samples were cooled in ice water baths and packed into polyethylene bags, then stored below freezing temperatures and examined from the time they arrived fresh until frozen, every two months, up until six months, the end of the study. Each sample was scrutinized for its nutritional content, indexing its total solids, minerals, chlorophyll content, carotenoids, vitamin C, total phenolic and flavonoid compounds, and antioxidant activity.

Consistent with previous studies, higher minerals and sugars in organic green beans are likely due to greater activity from microbes in soils which allows for more absorption of minerals at the plant’s roots. Greater quantities of vitamin C, total phenols, and flavonoids are also consistent with previous studies and likely due to a lack of synthetic pesticide and fertilizer use in organic, requiring plants to produce more of these natural compounds used for defense.

The study offered a surprising takeaway for consumers: cooking methods, such as boiling and steaming, increase phenol, flavonoid, and antioxidant levels in green beans. High temperature cooking methods make these beneficial substances easier to extract, especially for organic green beans, which already possess more of these nutrients from the start. In contrast, boiling green beans led to a greater loss of vitamin C than steaming, with these losses compounded further for conventional, which contains lower levels than organic.

Learn more about the science and benefits of organic farming through The Organic Center’s recipes: https://www.organic-center.org/recipes/sesame-green-bean-egg-salad 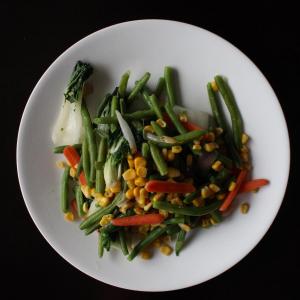