The Organic Center has completed a project that provides guidance to citrus growers on organic-compliant ways to combat citrus greening disease. From this work, The Organic Center has produced a grower guide for organic citrus producers and has coauthored a peer-reviewed publication that addresses this topic. 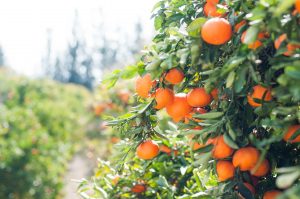 Since it was first discovered in the United States in 2005, the bacterial disease known as citrus greening, or Huanglongbing, has devastated millions of acres of citrus crops throughout this country and abroad, ravaging citrus groves in Asia, Africa and South America.

Citrus greening has impacted conventional and organic growers alike, but its injury to organic growers has been especially deep because most of the efforts underway to keep the deadly disease in check involve methods that are prohibited in organic produce production. In addition, the research and work that have been done on organic-compliant ways to fight citrus greening have usually been conducted in non-organic settings and in combination with treatments prohibited by the organic standards, resulting in critical information not easily accessible to organic farmers and educators.

To help organic producers more effectively combat this disease that threatens their livelihoods, The Organic Center has released a paper that mines the existing body of scientific literature devoted to citrus greening, compiles relevant results and synthesizes them to create a farmer/nurseryman-focused document that pinpoints and details organic-compliant practices for combating citrus greening disease and the Asian citrus psyllid (ACP) insect, which carries the disease. 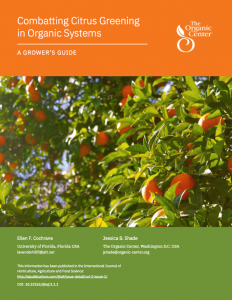 With this publication, The Organic Center has also released a guide for organic citrus growers to help combat citrus greening.

The study, funded by the UNFI Foundation and published in the scientific journal International Journal of Horticulture, Agriculture and Food Science, consolidates existing literature on allowable methods for combating citrus greening in organic groves and presents important findings from the scientific research community as well as grower experience and opinion; it includes both successful and unsuccessful practices. It is important to keep in mind that all groves are different and techniques that work in one locale may not be as successful in another. The fight against HLB is not over. There are suggested approaches that can be implemented immediately, and the research pipeline is working hard to produce therapies as well as advanced selections bred specifically for tolerance or resistance to HLB.

“Organic citrus producers have suffered terrible losses from citrus greening, and they need to be aware of organic solutions to ward off this disease,” said Dr. Jessica Shade, Director of Science Programs for The Organic Center. “Our goal in releasing this paper is to help organic citrus growers fight this deadly disease without resorting to dangerous chemicals, genetic engineering or other methods not in compliance with organic standards.” 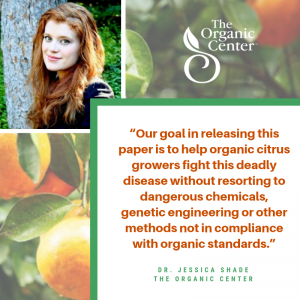 Citrus greening threatens the citrus industry on a massive scale. The highly destructive disease can spread quickly, and once a tree is infected, it cannot be cured.

Currently, the most common method for controlling citrus greening is by spraying large amounts of synthetic pesticides such as neonicotinoids. These toxic sprays have had only limited success, and have been responsible for large-scale bee die-offs. Other non-organic research has focused on creating GMO varieties of citrus trees resistant to citrus greening. But these conventional strategies have not yet proven effective and have contributed to policy decisions not compatible with organic management.

Organic citrus growers need ways to control citrus greening through organic practices, without the use of toxic chemicals or genetic engineering. The challenge is most research has focused on non-organic fields.

While research specifically targeted at the control of citrus greening in organic systems is very limited, numerous and diverse studies conducted in conventional systems have included non-chemical methods that potentially could be incorporated into organic protocols. However, because most studies that include organic compliant methods are usually done in non-organic settings and in combination with treatments prohibited by the organic standards, a significant effort is needed to find and extract the organic-relevant information embedded.

The Organic Center paper examines research from multiple citrus systems to distill the techniques allowed under organic certification to help control citrus greening. Examination of available literature, unpublished research data and grower observations have produced evidence that growers may be able to thwart the threat of citrus greening successfully in organic production to produce marketable fruit. 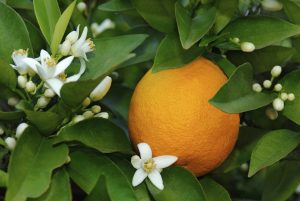 But despite the strategies highlighted in the report that can help organic farmers combat citrus greening, Dr. Shade of The Organic Center stressed that more research is needed to overcome this terrible disease.

“Conventional and organic farmers alike have had their groves decimated by citrus greening,” she said. “While our report provides tools for them, to help them in their struggle, without more research we'll continue to see a dramatic decline in citrus production - especially organic citrus.”