A collaborative study from USDA and Montana State University scientists delved “far into the weeds” in evaluating the global warming potential and greenhouse gas intensity in farming organic wheat when combining sheep grazing to manage weeds, and compared these findings to nonorganic or conventional wheat farming.

Net global warming potential is the balance between sources and sinks of greenhouse gases like CO2 (carbon dioxide). Agriculture produces about 13-20% of global greenhouse gas emissions, according to a report from the IPCC. However, farming can act as a sink for carbon when sequestered in soil through the application of certain farming practices, such as animal grazing, reduced tilling, growing and incorporating cover crops, and eliminating synthetic fertilizer use.

Scientists wanted to know how wheat systems contribute to climate change because until now, little science exists to show the net global warming potential and intensity of greenhouse gas outputs in organic farming, when animal grazing is used to control weeds.

To do this, they designed a study to capture emissions and compare both types of farming. In experimental plots, sheep grazing was used to manage weeds in a rotation of organic wheat and lentil crops with cover crops and tilling was reduced to once a year, whereas in nonorganic wheat, applications of herbicides were made to manage weeds and synthetic nitrogen fertilizers added for improving soil fertility under a five-year crop rotation in the northern Great Plains.

Concentrations of carbon in the soil were measured at depths of up to 45 inches in both farming systems, and greenhouse gas emissions were measured using static chambers placed in each of the farming plots that sampled in the mid-morning. Global warming potential was calculated by measuring:

Because of the absence of synthetic inputs, reduced tillage intensity, and greater sequestration of carbon in organic farming systems, they expected a reduction of greenhouse warming potential in the organic farming compared to the nonorganic system, especially when in combination with certain crop rotations.

Sources of these greenhouse gas emissions in agriculture can come from farm operations, such as planting, harvesting, tilling soil, and pesticide applications, and the manufacture and transport of agrochemicals, all contribute to the production of carbon dioxide. Methane can come from digestion of weeds and crop residue from animal grazing in organic farming, and nitrous oxide can come from applications of synthetic nitrogen fertilizers. 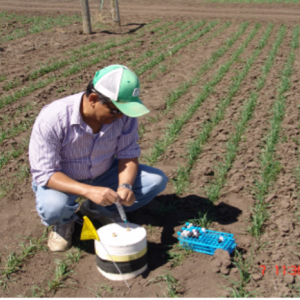 Learn more about the science and benefits of organic farming through The Organic Center's recipes: https://www.organic-center.org/recipes/banana-walnut-oat-bread