The Consequences of GMOs

The Consequences of GMOs

A new paper published in the International Journal of Environmental Protection documents several consequences of GM (Genetically Modified) crop use.  The researchers found many unintended negative effects associated with increased use of GM crops, including environmental, dietetic, and economic problems. 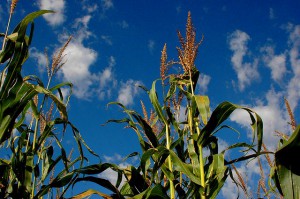 Environmental side effects include increased use of the herbicide glyphosate.  The main metabolite of this pesticide is AMPA, which can persist for long periods of time in the environment, jeopardizing the quality of ground water.  Additionally, transgenes may spread to non-target species through pollen drift, resulting in super weeds that are difficult to manage.  Pollen from Bt-Genetically Modified species may cause risks to beneficial species, such as nationally protected butterflies and bees.

There may also be dietetic side effects of GM crops, including cancerous, hormonal, reproductive, nervous or immune diseases.  Unfortunately, these effects are not well understood because few studies take into account the potential cocktail effect of multiple GM exposures.

The economy has not significantly improved due to the use of GM crops, and may cause an additional burden on countries that adopt widespread GM use.  Some of these economic strains effect farmers, such as costs associated with increased chemical purchasing and the need to purchase new GM seeds each growing, while others effect governments, such as the authorization, regulatory, and administrative costs associated with separated cultivation of GM crops. The researchers conclude that “weed control with the use of glyphosate does not solve any so far unresolved issue,” and state that “it has not been proven in agricultural practice that chemical pressure on environment would be reduced by herbicide tolerant GM crops.”