There is first-ever data on three baby foods — pears, green beans and sweet potatoes.  In general, the sweet potatoes and pears were pretty clean, but 9% of the green bean samples had clearly unacceptable levels of the organophosphate insecticide methamidophos.  A remarkable 25% of pear baby food samples contained six or more residues, and 3.7% of the samples contained 10 residues.  Not good. As always, buy organic! 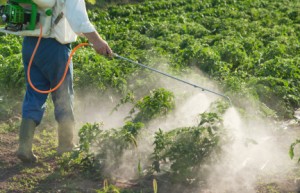 Nicotinyl insecticide residues are extremely common because they are widely used and are systemic – they work by moving into the plant, including the harvested portion. In fact, about 1 in 10 of samples tested by the PDP (across ALL crops) had residues of imidacloprid (Admire), and many fresh fruit and vegetable samples contained residues of two nictoinyls.  This is the family of insecticides implicated in honey bee Colony Collapse Disorder.

Extensive testing was carried out on drinking water, including school wells.  These data have some surprises-- especially the fact that 85% of finished drinking water had residues of 2,4-D.  This phenoxy herbicide is known to be a significant risk factor for a host of reproductive problems, birth defects, and cancers.  It is also linked to a possible, new herbicide-tolerant, genetically engineered corn variety currently under review by the USDA and EPA.

Atrazine (another endocrine disrupting herbicide linked to breast cancer and a host of developmental abnormalities) was found in 95%+ of samples of drinking water! The levels are generally very low, but this year's PDP confirms that most people living in heavily farmed regions are ingesting three, four or more herbicides daily via finished drinking water.

The PDP survey also includes organic samples.  Just as in recent years, the organically grown food tested by PDP in 2010 has substantially fewer residues.  When residues are detected, the levels are usually 10-X to 100-X lower than in conventional samples.  Based on TOC’s “Dietary Risk Index,” typical risk levels in organic foods are 50-200 times lower than in the corresponding conventional foods.  Clearly, consumers purchasing organic food to lower pesticide exposures and risks are getting just that.